Well, friends and hated enemies, it's One pm, I'm having my morning coffee, and cradling a Fender guitar in my lap. Looks like its time for an informative and helpful article by Chaz. Hold your nose and dive in.

Youth culture. Basically, in America that means juvenile delinquents, gangs and hip hop. It could also mean the math club, or a basement full of Harry Potter geeks, I dunno. You tell me. With our Bobby Soxers, Beatniks, Jazzbos, and later our Rockabillies, (and much later, our skaters, punks, etc) we in this country basically started the modern youth culture. For us, however, these lifestyles are often a simple symptom of teenage growing pains and the quest for an identity. We are expected to "grow out" of these "phases".

In the UK however, they took it to a much more violent, and interesting, extreme. People there, most often working class folk who are not career people, immerse themselves in subcultures at a young age, and never leave. They don't grow out of it. It is a lifestyle, and a way of life. It is not just simple dress up or indicative of the music one listens to. It is handed down from Father to son, Mother to Daughter. There is an intense sense of pride. Many people are aware of violent clashes between Brit youth groups...Mods Vs Rockers in the 60s, Teds Vs Punks in the 70s, Skins Vs Everybody, etc. This is the extent of British working class dedication to their subcultures, and also an indication of the extent of British working class boredom. these are not people who have a lot of opportunities in life. the Brit class system is still very much alive, and in times of economic recession especially, these people are on the low end of the totem pole. They have hard, physical jobs and they raise families on a shoestring budget. Often the only enjoyment these people get out of life is through Football (what we would think of as soccer) and subculture. Dances, Rallies, Meetings, festivals are organized. Most of the subcultures developed heavily in britain throughout the 50s, 60s and 70s still exist, although thankfully the violence between the subcultures has lessened, and usually revolves around Football matches more than rock n roll gigs.

I personally take my fashion tips from ALL of these subcultures, which is a jumble sale, very American thing to do. This is probably a horrible sin that would get me beaten to a pulp in the UK, at least in the old days...but I'm an American, what do I know, eh? I'll wear a mod parka with Teddy Boy brothel creepers, I'll wear a Rocker style leather jacket with a Mod target pin on it. Punk Rock sort of stole from each of these cultures, as well. Below are some of my fave subcultures,. By no means is this a complete list. Just my faves of the PRE- PUNK ROCK Brit subcultures.

We start with the TEDDY BOYS: 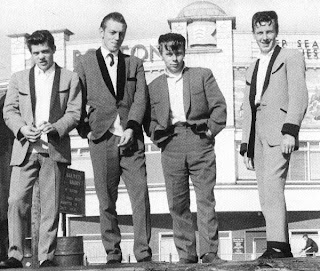 Descended from the Teddy Boys, Rockers also live the 1950s rocknroll lifestyle, but prefer the dirtier, Biker gang, leather and chains approach first seen in American movies like "The Wild One". 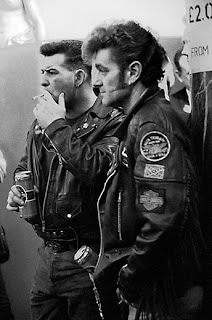 The Rockers dragged the 50s style kicking and screaming into the 60s, 70s and beyond.They would wage war with any subculture who professed to be more modern, like their famous battles with the Mods. They rode classic British and american motorcycles, and often spent most of their money on maintenence of said vehicles. Like the Teddy Boys, they too listened to American rocknroll music of the fifties, and any newer bands with that sound.

Their arch rivals were, of course.... 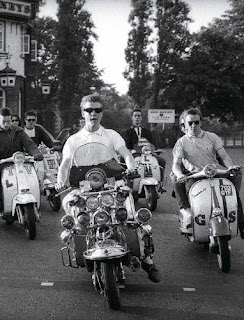 Mods listened to a hodge podge of American and British Soul Music, modern British "Beat" music like the Small Faces, The Who and the Kinks (although regarding the Beatles and Stones as 'too mainstream'), Jazz and especially Jamaican Ska and early Reggae.

This was entirely a 1960s born phenomenon, and the Mods hated the rockers for being so retro and not embracing the new.

The Mod look was decidedly detail oriented. One must wear the certain type of suit jacket with the most updated style. One's lapels could not be too big. Ones trousers must fit perfectly. The Mods spent their money on tailoring. The hair was clipped short and smart. Fashions were adhered to slavishly.

The Mods look, once again comes from America. American GIs left over from the war (WW2) had settled in England, bringing with them american soul records and stylish Rat Pack era fashions. Sharkskin (or "Tonic") suits, casual loafers, short, neat hair, skinny ties. The Mods took to this heartily, adding 60s Carnaby street flash to the mix. Also a direct American influence is found in the Mods donning of American GI Parkas, again left over from the war and available in large amounts at Thrift Stores and secondhand shops all over London. The parkas were usually worn over sized, to cover the expensive suits and other clothing the Mods wore. Mods also favored Fred Perry polo shirts, Stay Prest trousers and Desert Boots. Very sharp stuff.

The Mods would consume mass quantities of amphetamine sulfate, in order to dance all night and look ace doing it. The best looking and hippest Mods were called "Ace Faces". Mod transportation was largely limited to Italian Scooters.

Onto the most misunderstood and maligned Brit cult of all.

There's" something about a shaved head that just looks violent and agressive. Skinheads evolved from Mod. As original Mod-ism devolved into the late 60s frilly hippy quagmire, some of the old faces, and new ones, began to rebel against the long hair and crap music that was all the rage. Taking original Mod icons like Fred Perry shirts, Stay Prest trousers with them, but ditching alot of the more extrovert dandy-ism, skinheads were the most extreme die hards of sharp, clipped style. Donkey Jackets, suspenders, Flight jackets and Doc Martens (usually worn over size) were other elements of the style.

In the beinning, Skins listened to Jamaican Reggae and Ska as the main part of their musical diet. The look was part Mod, part American GI, part Jamaican "Rude Boy" (gangster). It was not a racist movement at this point. The emphasis was on dancing, drinking, working class family values, and Football. It could be violent, especially at football matches. But there was no "Nazi Youth" element, something which unfortunately creeped in to certain skinhead circles much later.

One of the early Skinhead Rocknroll bands was SLADE, who went on to much greater fame as a (awkward looking) Glam Rock group in the 70s. Driving, loud British RnB was always Slades' forte. I think they looked much better as skinheads though. Check it Out:

Their look and sound at that point was proto punk, several years before punk happened. Proto-Oi, perhaps. So that makes them the UKs answer to the Stooges and MC5, no?

Here's a great pic from the original skinhead era. Ska/Reggae icon and absolute soul master Jimmy Cliff with some skinhead boys and girls (both boys happen to be members of Slade):

In the late 70s, some skinheads (but NOT all) adopted some punk styles and also misunderstood Punks' use of the swastika as a shock tactic. Racist organizations preyed on young working class youth and sucked alot of skins into their orbit, hereby forever associating skinheads with racism and violence even though most skins were not racist. Violent, probably. Racially motivated, no.

Here is a great picture from the 70s that I think illustrates my point:

Smarter Skins were swept up in the late 70s 2-Tone Craze, which was a musically energized period wherein punk musicians began to play hopped up supercharged versions of Ska and reggae. This music is some of the greatest, most unpretentious, most fun music in existence.

There was also a heavy Mod revival in the late 70s, crossed with punk and inspired chiefly by (one of my all time fave bands) the Jam. Skins, Punks, and Mods were both present at the Jams' gigs as well as gigs by any Two Tone band.

When Skinhead-ism spread to America, it was misinterpreted by most. The Neo-Nazi movement got tons of press here,and drew alot of psychotics and racists under the banner of skinhead-ism. Once again, when you mention Skinheads these days , most people think of racism. This is very sad. Especially when there are organizations like the SHARPS out there (SkinHeads Against Racial Predjudice).

In the present day (or more recently, anyway), alot of big UK bands like Oasis and Blur have revived elements of the Mod/Skin style. Paul Weller of the Jam has a wildly successful solo career, and draws thousands of Mods to his gigs to this day.

I've attempted to demonstrate how US and UK styles have meshed over the past 60 plus years and formed most of what we consider western pop culture. Present day "hipsters", seen and maligned the world over, are themselves an unwitting and often ironic hodge podge of mod, rocker, punk and skin styles, adding a hippy/bohemian/slacker vibe to the mix. This is widely considered annoying to those of us old enough to remember the real styles, and how they once meant more than just fashion. Even so, the styles endure in their pure and semi-altered forms to this day.
Posted by Charles Matthews at 3:04 PM