Living In The Past: Why Retro? 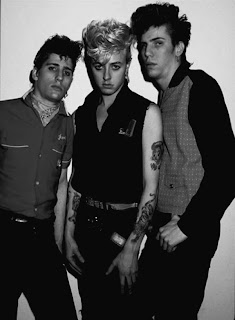 When I was 12 or 13 years old, I listened to (and taped everything off of) the radio. Everything. I loved music. I loved how it took me outside of the tiny Western Michigan town that I lived in and promised a world that I knew I wanted but couldn't even conceive of. At that time, I had no idea of what genres I preferred or what type of music I liked. I wanted everything. This was in the early 80s, so the songs i taped off the radio were pretty much what you'd expect. "Come On Eileen", "Sweet Dreams are Made of This", "Tainted Love", "Do You Really Want To Hurt Me", "Every Breath You Take", "Jessie's Girl", "Private Eyes", etc. But there was one song that always made my tapes that struck me in a wholly different way. It was called "Sexy And 17" by a group called the Stray Cats. That song was something else entirely.

Even at my young age, with my untutored musical ear, I could tell this song sounded nothing like the rest. And I saw pictures of the band in my rock magazines that I'd started collecting. They looked a little like the other bands of the time. Duran Duran, Soft Cell, etc. all had members with high hair and leather jackets, but there was something different about these Stray Cats guys. They sort of reminded me of Elvis, whom my mother loved, a young Johnny Cash, who my father loved, and the movie Grease, which my mother and sisters loved. They also reminded me of the Sunday afternoon infomercials I'd seen on TV. We only got three channels where I lived, no cable, no MTV ( a new music channel that I wouldn't actually see for another couple of years), so whatever was on, we watched. Sunday afternoons there was always this commercial for a huge set of vinyl records by Time Life called something like "The Golden Hits Of The Fifties". I absolutely loved the songs they'd play, and the grainy black and white video clips they'd show of the performers. These people looked like they were from Mars to me. I also remember that my Mom would sometimes sing along to some of the songs. I was amazed that she had ever had anything to do with anything this cool. My Dad even bought me a Chuck Berry tape at a truck stop one day, trying to get me into the real stuff. It didn't really work. Not yet.


After awhile I'd collected all the Stray Cats' hit songs on a tape: "Rock This Town", "I Won't Stand In Your Way", "Stray Cat Strut". Like a lot of things when you're that age though, my Stray Cats love sort of faded. I got into Def Leppard and Motley Crue and Ozzy and all the other hard rock stuff of the day, like every other kid my age. Predictably, I grew my hair long and bought a pointy guitar. But not for long.

By the time I was 25, I was a full fledged music obsessive. I had become pretty decent on the guitar, collected hundreds if not thousands of records, tapes and CDs, played in several bands, and moved to the big city (Boston) to "make it". I had grown out of hard rock and delved deeply into the world of punk rock. I had become obsessed, utterly with another favorite band. One who would inform my musical tastes and change my life, my hairstyle, the types of guitars I played, my politics, the movies I watched, the books I read, my morality, my clothes...I'm talking about the only band that matters. The Clash. 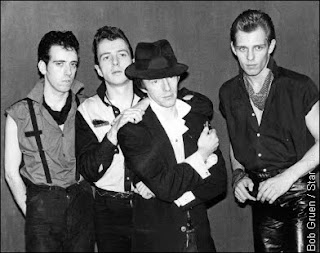 In reading about and obsessing over everything that Joe, Paul, Mick and Topper had ever done, I ran into a few words that excited me and sent my young imagination afire. "Rockabilly", "Quiff haircuts", "pompadour", and I said aloud as I read, in hushed and reverent tones, the names of the saints: "Gene Vincent". "Eddie Cochran". "Chuck Berry". The Clash also got me into Ska, reggae, pub rock and Kerouac, but that's another story.

I started wearing an old raggedy bowling shirt, cheap fake doc martens, and combing my hair into a huge dyed black pompadour. Construction workers would point at me and laugh as I walked the streets, shouting "hey Elvis!", snickering into their greasy Burger King lunches. I knew I was on to something. 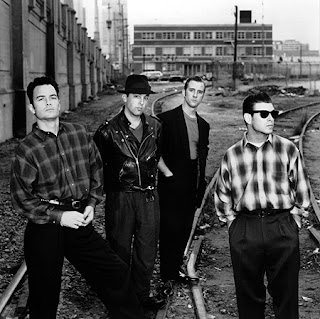 The other band that I was excited about at that time was Social Distortion. This is the band that really re-ignited an obsession with the rebel rock of the past, in the consciousness of Gen-X punk rock types like myself. Mike Ness and co covered Johnny Cash, greased their hair, played vintage instruments, and acted tough and bad ass in that time honored 1950s way. I loved them, still do.


My own band at that time (mid 90s), the Dimestore Haloes, made records and toured and were fairly well known in punk circles for adding, like the Clash, The Cramps, and Social D. did in various ways, that 50s aesthetic to three chord, fast punk rock. Lots of bands did this at the time, and I wish more did today. I'd probably be more interested in modern punk if the kids still had a clue. 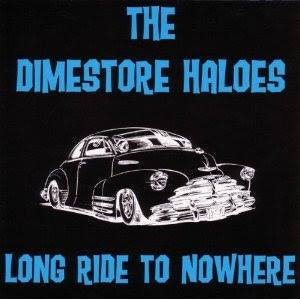 In the 90s I also discovered something that would further drive home and inform my 1950s /1960s obsession. Norton Records and Kicks! Magazine. The irreverent, hilarious, intelligent and informed writing in the mag, and the music put out on the record label (both owned by Billy Miller and his wife Miriam Linna)was, and still is, perfect. The mag no longer exists, and good luck finding copies, but the label is still going strong. 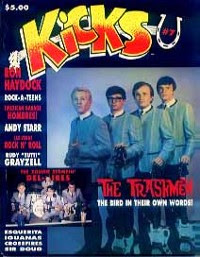 Unlike other phases in my life, the love of the 40s, 50s and early 60s never went away. I'm 41 now, and more obsessed with learning about those eras than ever. I own a 1954 kitchen table and chairs, as well as a '50s coffee table. My wife and I go to antique and vintage stores every chance we get,looking for old records, toys, photos,clothes, just to see them if we can't take them home.

I can't afford tons of expensive antiques (and '50s stuff is remarkably pricey), but if anything looks remotely mid century I want it. I buy new guitars and modify them to look like old ones. I watch black and white movies and read books by 1950s writers. I go to a 1950s style barber shop to get my hair cut. I obsess over Elvis, Sun Records, Meteor and Starday releases, Hank Williams. Link Wray, Esquerita, Howlin' Wolf. Old cars, old motorcycles that I'll probably never be able to afford. 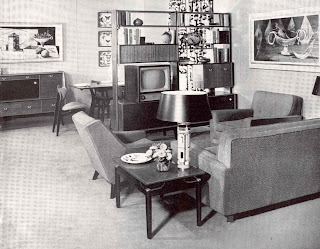 I'm not a collector, I'm not an antiques dealer or mid century historian. I just want the feeling. I know you can't buy it or own it. I just want to touch it. The past. It's a different world. Cars were works of art, clothes were durable, comfortable and stylish. There were new innovations in design, art, and politics as well as music, movies and literature. Tradition was still respected. It was not a perfect world, I know. But it's a world that we've lost entirely in this age of technology, instant gratification and moral decline. Those old movies, records and ideas aren't dated or boring to me. Those days jump off the screen and come alive. 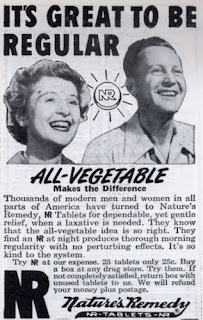 There is, for the vintage obsessive, also the feeling that we'll never quite touch the object or idea that we love. We can't know what it was to be alive back then, because we weren't, or if we were, we were too young to remember much. I totally admit, however, that if I woke up tomorrow morning suddenly transported back to the 50s, I'd probably be extremely annoyed at not being able to use my cell phone, and having to actually drive into town to check out that new Carl Perkins or Billy Lee Riley or Little Richard 45, instead of just punching it in on eBay and having it sent to my home, or failing that, just downloading it. I know I've romanticized a period that will never return and is wholly gone, and I do so because it seems to suit my personal aesthetics more than the time I actually live in. 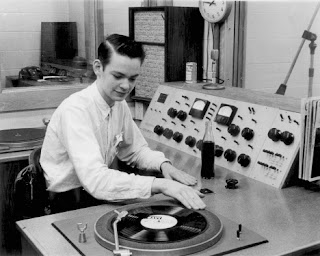 Nevertheless the obsession remains. I guess some guys watch football, some guys play video games, some guys work out and wax their armpits, I hang out in antique stores, make new guitars look old, and read enough books on Elvis to numb the very mind and ass of the average person. I own three books about Eddie Cochran. Three. One, apparently, was not going to cut it. I buy every worthless repro 1950s toy I find in novelty stores. Doesn't matter if it's reproduction. It looks right. It's cheaper and in better shape. I get that feeling from it. That's what I'm after. At this point, I've been into this for well over 20 years. The interest has never really waned, and I hope it never does. 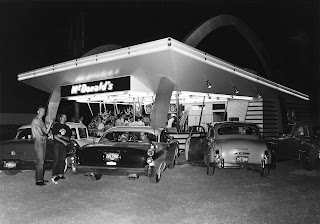 Posted by Charles Matthews at 11:52 AM