Heavy Doom Coming Down: My Secret Love Of Doom Metal 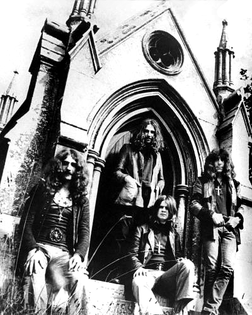 I love a ton of different styles of music. If it has loud guitars, I like it. In fact I think that if I had to sum up what I like, I'd say "guitar music". Everything, and I do mean everything that I like has the electric guitar as it's core element. To look at me, though, you'd probably think I was a rockabilly, or a punk, or one of those greaser hot rod dudes. Most of that sort of fits. I do love classic country, rockabilly, psychobilly and all forms of punk rock, power pop, etc. Occasionally I'll shave my head and people will think I'm into Oi, Soul and Ska. I like those things alright. Another passion of mine is probably my earliest one: classic Heavy Metal. When I was 16 or 17, in the late 1980s, I had nipple length hair and listened to a ton of thrash metal, power metal, pop metal, glam metal, you name it.

When I cut all my hair off and "went punk" in my very early 20s, I started denying my heavy metal heritage. Certainly by the time that the vomit stinking tide of "Nu-Metal" (an abomination, for those of you lucky enough to have escaped the knowledge: A cross between rap, metal and funk. It was awful) took over the world of heavy music, I had entirely lost interest. I was off discovering rockabilly, hardcore, country, post-punk, and all the other delicious morsels of guitar music I could get my red and sweaty ham-fingers on.

In the mid 2000s, though, as Nu Metal's sickening testosterone fart-grunts faded into the distance, I started getting curious about what was going on in Metal again. There were some really young kids at my job who wore Iron Maiden shirts and talked about how great King Diamond was, and I wondered how these young bucks knew about such glorious forgotten gold-nuggets from my rock'n'roll past. Turns out, metal was getting big again. With good reason. These youngsters turned me onto new (not "Nu") metal bands such as Municipal Waste, Mastodon, High On Fire, 3 Inches Of Blood, Toxic Holocaust, etc. younger bands that remembered the ancient ways of good ol' forged in fire heavy metal. Thankfully, my good pal Damian started getting re-obsessed with the genre right around that same time, and began buying truckloads of new and old metal CDs and sharing them with me. Metal was back, and i was back into it, and could not for the life of me think of why I'd ever left the fold. Damian and I went to a buttload of metal gigs and got to see some serious greatness.

In the last five years, the scene has only gotten better. Especially the Scandinavian chapter who have produced such perfectly thrilling and chilling bands as Ghost, Graveyard, In Solitude, etc etc. The metal sub genres are endless. Your traditional Thrash, Crossover (which is hardcore punk + metal), Death Metal, Grindcore, Black Metal, Stoner Metal, Power Metal, plus your innovative Death N' Roll, Black 'N'Roll, Blackened Thrash, Blackened Death Metal, etc etc I could go on and on.

For me, metal is great when it's simple, raw, brutal and ugly. Early Bathory and Celtic Frost are good examples. I also like it when it's slow, heavy, atmospheric and spooky. Which brings me to a fairly new-ish obsession of mine. Doom Metal.

Doom metal starts with the Blues. Howlin' Wolf Epics like "Killing Floor" and "Goin' Down Slow" have the heavy rhythms, desperate, fatalistic lyrics and wailing guitars that would inspire English kids like Led Zeppelin and the Yardbirds to pick up guitars and start livin' the hard life. The blues was also obsessed with the Devil, and warnings of the evils of sin were as common as celebrations of the joys of same, sometimes by the same artist in the same song. Robert Johnson was said to have sold his soul to the devil in exchange for the frantic guitar genius that possessed him before he was murdered in 1938.

One of Howlin' Wolfs' heaviest riffs was "Smokestack Lightnin'". Does this sound like doom metal to you? Not yet. but if you bear with me it'll all start to make sense in a minute. Witness the blues.

When four British kids from the tough industrial wastelands of Birmingham , England finally heard the blues in the mid-1960s, they wanted to play it too. When they did it, it sounded like this. And Doom Metal was born.

Black Sabbath were, without a doubt, the first heavy metal band. Which makes doom metal the first heavy metal. The Sabs single handedly invented metal by playing the blues harder and louder than anyone had before, and adding black magic, hippy anti-war sentiments, a cloud of pot smoke and horror movies to the mix. Metal soon innovated itself away from some of these precepts. It got faster, harder, uglier and ditched most of the hippy sentiments entirely, embracing the hard, cruel urban decay of hardcore punk. Doom Metal, however, evolved from fans of Black Sabbath that didn't want change or innovation. They wanted to embrace the doom and darkness and the death of the hippy ideal. Just as Sabbath ended the 1960s with their storm clouds of heavy doom, these bands helped to end their respective decades with batwings, heavy chunks of riff destruction and reefer smoke. The next great doom band was Pentagram.

These guys were so doom, they couldn't even make a full length record for the first ten years of their existence. Frontman Bobby Liebling was so doom, he couldn't stop doing drugs and trying to end himself long enough to put down a whole lot of music in the band's original 1970s incarnation. Fortunately for him though, and for us, what he did put down ( a couple of fly by night singles and rehearsal tapes that were collected and traded by the doom elite before they ever saw wide release)was so good that it became legendary, and led to the first of the bands' many comebacks, in the 1980s. This time they did release an album, the absolutely legendary "Relentless". This thing is the modern doom touchstone. It is depressed, drug addled death-blues of the highest (lowest) order. This time, a harder, 1980s style metal sheen was present in the guitars, and the Ozzy like vocals. The atmosphere of claustrophobic doom and anxiety was palpable in the sounds and the depressed hippy lyrics.

After Pentagram, another band of throwbacks in bellbottoms came shuffling along, scowling and howling into the wind. Witness the mighty SAINT VITUS.

They were so doom, they signed to a hardcore punk label (SST, home of Black Flag) and toured with mostly punk bands, whose audiences mostly hated them. They were so doom, they liked being hated. Punks despised hippies, and Vitus, like Sabbath and Pentagram before them, LOOKED like hippies, despite being more like punks in reality than most punks were, if you're pickin' up what I'm puttin' down. So the very clique-ish hardcore kids of the 1980s were horrified and angered by Saint Vitus' slow, dirgey, doomy songs and satan-hippy image. For awhile. Before too long, punk and metal crossover was pretty common, and you could be a punk with long hair or a metalhead with short hair. But that's a whole other blog. After Vitus taught the punks about Iommi, lots of bands started popping up all over who took the leaden, ominous, Frankenstein stomping tempos of Sabbath and brought them forth into the modern age. Trouble from Chicago were one, as were Candlemass and Cathedral from Sweden and the UK, respectively. Witchfinder General, also from the UK, were part of the "New Wave Of British Heavy Metal" in the early 80s. They took a Sabbath obsession to punky places and replaced the fatalistic doom message with day-glo comic book schlock-horror. As a result, they were pretty damn great. The 1980s and early 1990s were full of great examples of mid period doom. Also being born (again) in this period was stoner metal. Stoner metal is basically doom metal WITHOUT the horror, death and gloom themes. I like some of it, but it's not as interesting to me without the macabre, spookhouse, death-hippy acid flashback element. One "stoner" band who has delved more and more into the murky blood-waters of pure doom is England's ELECTRIC WIZARD. They are perhaps the greatest doom band the world currently has to offer.

Japan's CHURCH OF MISERY are one of my newest favorites in the heavy death-hippy genre. They have HUGE rollicking riffs, a great 60's LSD murder-hippy image, and all their lyrics are about serial killers. Pretty much genius. They remind me of Japanese Misfits worshippers Balzac in that they take all the best elements of their genre and distill them into a perfect product. probably the best solid example of a doom band going right now.

Also amazing are San Fran's ORCHID. They are so Black Sabbath sounding, that I imagine their newest record is a better Black Sabbath record than the original Sabbath are capable of making these days. Witness the pretty much perfect late 1960s stoned and satanic vibe they've got going in their new vid:

I would be remiss if I did not mention ex-Pantera vocalist Phil Anselmo's band DOWN. Possibly the biggest ever doom band after Sabbath themselves, these guys took Doom to a whole new, punky, thrashy, scarily aggressive level. Their first album "Nola" is a classic of the "southern doom" chapter of the genre.

One thing that almost all doom bands have in common, and I really can't find many that don't share this element (besides Pentagram, who favored Les Pauls and Down, who can afford to use different guitars for every song), is the Gibson SG. The SG is THE guitar of doom, having first been adopted by Sabbath guitar god Tony Iommi in the late 1960s. 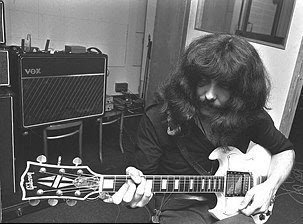 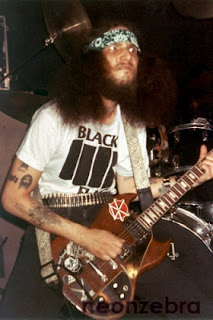 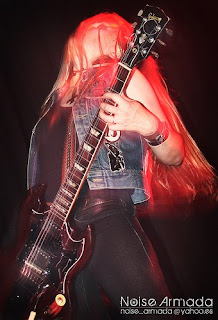 If you want to be Doom Metal, you pretty much need to have a Gibson SG.You also need to see a couple of movies. Below are just two examples.


And lest we forget the one that started it all:"Starring the personable Mark Damon, and lush and lovely women. Even though one of them is from the netherworld!"


Well sir, I'm running out of time here, but I hope I have hipped you to the gloomy thundercloud stomp of doom metal. It's a fun and funky rock'nroll sub genre that more than puts the black in your sabbath.
Posted by Charles Matthews at 1:28 PM