Staring Into Damnation's Hole: The Ghastly Love Of Johnny X! 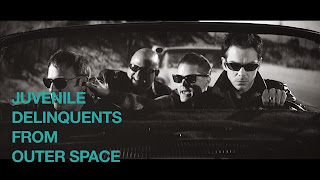 A few months back, I was clicking through the great wasteland of cinematic detritus that you may know as "Netflix", looking for either something "good" to watch (unlikely) or something that would be horrendously bad enough that I would enjoy it for it's very ridiculousness (possible). I did not expect to find a new movie which I had no previous knowledge of that would instantly take it's place among the very finest of the campy kitchsy classics that I hold so dear. When I found Paul Bunnell's "The Ghastly Love Of Johnny X", I found just that.

I'm tempted here to describe at length the concept of the B Movie and detail the plots of some of the greatest. Having nixed that, as I'm writing a blog not a novel, I started to think I should write about Ed Wood, Roger Corman, other geniuses of the low budget, low production value, trash-schlock film making of the 1950's and 1960's that is an American treasure and an absolute joy to be obsessed with. Again, that would take a year long series of blogs. I'm also going to assume that since you are reading my blog, you are most likely aware of these things already. What I will say is that "The Ghastly Love Of Johnny X" is in the fine, fine, tradition of these cinematic bursts of passion and frivolity. It both epitomizes and lovingly parodies this great underbelly of American cinema in a way that's sure to warm the hearts of anybody who loved movies like "Plan 9 From Outer Space", "The Rocky Horror Picture Show", or even later John Waters stuff like "Cry Baby" and "Hairspray". Much like the great Ed Wood, Paul Bunnell (despite his relatively young age) is a true Golden Age Hollywood Eccentric. Possibly the last of a dying breed.

This movie is an obvious labor of intense love for the genre, and the aesthetics of the 1950's juvenile delinquent era. It was shot rather gorgeously on black and white film...yes, FILM. Just in case you don't know, they don't make movies like that anymore. It was shot, in fact, on the very last of Kodak's B&W "Plus-X" film stock. The film has a thick, stark, black white and grey creamy dreaminess to it, utterly crisp and clear. 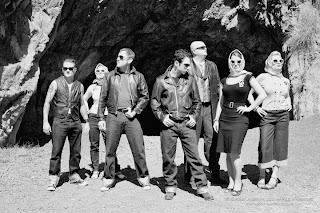 The plot is a convoluted and never fully explained Sci-Fi/Juvenile Delinquent coming of age love story, if you get my planetary drift. There is a classic "James Dean vs. neglectful Daddy" situation going on. There is a crazy jump suit that gives it's wearer the power to re-animate the dead. There are leather jackets and cuffed Levi's. There is hair grease and doo-wop. There are 35 year old juvenile delinquents from outer space. There is a mix of 1950's and 1960's automobiles, fashions and music forms. In short, everything that is great in life crammed into one glorious, classic, perfect mess of a movie that looks like it was as much fun to make as it is to watch.

The gang of alien JD's in the movie are called "The Ghastly Ones". When I saw this, I wondered if anyone had approached the legendary California Surf-punk/Horror surf band The Ghastly Ones and asked them either for permission for the use of their name, or for the use of their music. THAT would have made a great movie greater. Alas, there is no Ghastly Ones music in the flick, a missed opportunity if ever there was one. The soundtrack is comprised of orchestral theme music, surf-rock background tunes, and the musical numbers sung and danced to in the movie. The orchestral stuff is awesome. Booming 1930's-1950's Film Noir/Universal Monsters type stuff with a spookily wailing theremin. The surf-inspired backing tunes by the Moon Rays are just OK, and I'm going to have to re-iterate that the (real) Ghastly Ones should have been involved. As for the musical numbers throughout the movie, they're fun, goofy and catchy, but totally not authentic to the '50s period. Sure, I'd prefer to hear these characters singing some authentic rockabilly or '50s R&B, but what we have here is an audience-friendly pastiche that works in the fun spirit of the movie.

There are several minor celebs in the film, mostly in cameo roles, such as 1970's icon Paul williams in the role of smarmy talk show host "Uncle Quilty", Reggie Bannister from the '80s horror classic "Phantasm", and 1950's movie star Kevin McCarthy in what would be the final role before his death. Most impressive though is Creed Bratton (of the American version of "The Office"), who plays washed up 1960's rock'n'roll star turned zombie Mickey O'Flynn. This is a great role for the underrated actor, who imbues this character (who is sort of a mash up of Screamin' Lord Sutch, Alice Cooper and maybe a white, dead Screamin' Jay Hawkins) with a sort of dazed, lost humanity which is both funny and sad. The musical numbers that he sings/performs are some of the best in the movie. The other actors in the film, while being less familiar faces, all deserve a shout out, especially Will Keenan as the angry alien "teen" Johnny X and Deanna Joy Brooks , who is quite alluring as the breathy-voiced femme fatale Bliss. 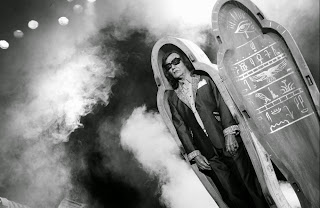 I could babble on all day about how fun and cool this movie is, but sadly, I have a life. A life which was greatly inproved for a couple of hours by this movie. If you're at all intrigued, get on Netflix and give this baby a spin. Also check out the Youtube clips and reviews, as well as the always kooky and entertaining interviews with director Paul Bunnell and various cast members. It's not every day you find a new classic in a much maligned and much beloved meta-sub-sub-genre like this. I'll leave you with the film's trailer. Enjoy.

Posted by Charles Matthews at 10:48 AM