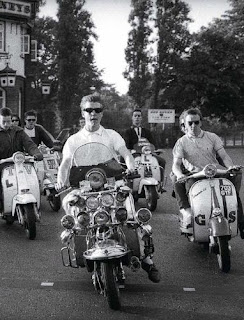 Mod. An abbreviation. Does it mean modern? It used to, but now it means retro. What is it? It's a youth culture revolving around clothes and music that originated in the late 1950s in London, England and other pockets in Britain, never really dying out while enjoying small semi-mainstream revivals every few years.

What was Mod fashion? Over the years it has evolved into many things. Many people erroneously refer to the dandy-ism of the mid-late 60s as "mod" because that's when the word first became known in America. Some think of the Beatles of the early-mid 60s as mod, but really they were far too mainstream, despite sharing a general image and musical sphere with mod.

Mod Fashion was Three button tonic suits with five inch side vents on the jacket for night time, Ben Sherman button down check shirt or Fred Perry polo in the daytime, topped off by a Barracuda Harrington jacket or collarless monkey jacket to keep out the cold in style. 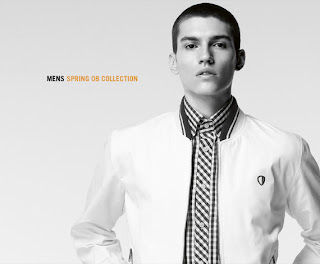 Turned up Levis 501 jeans or Sta-Prest trousers. Brogues or tassle loafers on the feet, or if you could get them, American sneakers or baseball boots. Those were the staples, among other items, of real mod fashion. These items were purchased feverishly as both fetish item and practical streetwear.

Besides the above mentioned, fashions came and went rapidly, sometimes weekly, and you would not want to be seen out sporting last week or last months' look. US military issue parka coats were worn over the suits so as to preserve their fresh clean-ness. You didn't tolerate dirty or wrinkled suits. Many younger mods drove Italian scooters such as the Vespa or Lambretta.

What is mod music? Initially, mods didn't play music, they just danced to it. The first, elite late 1950s London mods listened to Jazz music and watched Italian films, smoking French cigarettes and talking about matters of great political and spiritual import at London coffee bars. The first explosion of mod wasn't until the early 1960s however, and by this time it had evolved into a more visceral cult of sharply dressed, amphetamine crazed youngsters that obsessed over American soul records and Jamaican "blue beat" or ska music, an early form of US soul influenced reggae. 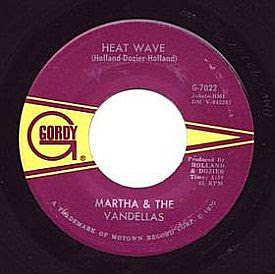 <--Soul Music.
There were no white "mod bands" until the Who and the Small Faces. The Who had their mod image forced upon them by their mod managers, but through the genius song writing of Pete Townshend and the violent, dandy thuggishness of Roger Daltrey, the band would come to represent for millions of people the world over what "mod" is. A certain semi depressed, grey Englishness brought forth loudly with guitars, cool clothes and the sharpest and smartest of pop songwriting hooks. The Small Faces were pretty much the same animal, but their sound had a much more US soul influenced slant, with the otherworldy Otis Redding style vocals of the amazing Steve Marriot in the forefront. Other bands like The Creation and the Action followed the Who and Faces into the mod hall of fame. 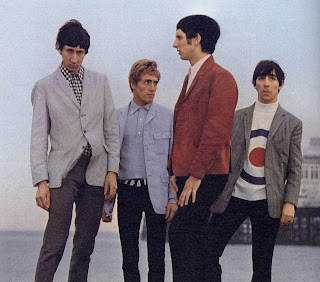 <--The WHO.
Mod made international headlines when fights with the "Rockers" ( a similar Brit-youth cult who worshiped 1950s rock and roll and rockabilly music and rode motorcycles) became publicized. Perhaps because of escalating violence between the two groups, changing fashions, etc, mod slowly went underground toward the mid-late 1960s.

Two things brought mod back to the British mainstream in a huge way in the late 1970s. One was a band from Woking called the Jam, who had cruised into the public eye on the tail end of punk rock's first wave. Punk Rock was all about recycling and combining. The Jam combined punk's up to date fury with the sharp suits and jangly pop guitars of the mod-era Who. 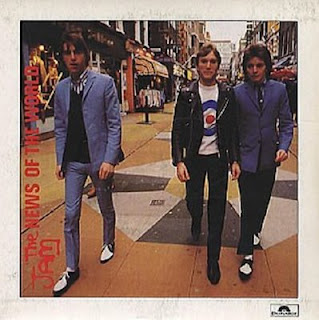 The JAM.-->
The second item that re-invigorated mod was a movie called "Quadrophenia", written by the Who's Pete Townshend, and soundtracked by the band's brilliant album of the same name. The album and film were companion concept pieces about a young mod coming of age in London in the mid 1960s. It is an unassailable, brilliant film. Like "Rebel Without A Cause " in the 1950s, this film summed up it's generation perfectly.


After the popularity of the movie exploded across Britian, new mods sprang up in any tiny town or major burg all over the UK. Even in America, the style was taken up by ex-Punks and New Wavers. All of these new mods saw none other than the Jam as their heroes, their spokesmen, their Who. An overwhelming list of Mod Revival bands such as the Purple Hearts, The Jolt, The Circles, Long Tall Shorty, Secret Affair, the Merton Parkas, The Chords, and hundreds more formed and released mod influenced singles and albums that capitalized on punk energy and the glimmering three chord jangle pop of the Who and Small Faces, filtered through the revisionist sound of the Jam.They wore Fred Perry and Ben Sherman, turned up their Levis, restored old scooters and danced to soul and ska, just like the old days brought up to date. This revival lasted into the 1980s, and died down quite a bit when the Jam broke up in December 1982. 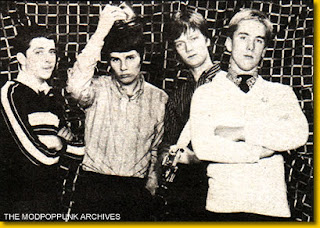 <-- The Purple Hearts.
It wasn't until the early 1990s when Mod reared it's perfectly cropped head again, this time in the guise of Brit Pop. Bands like Oasis and Blur paid tribute to their mod influences and re-ignited an interest in the style. Paul Weller, the brilliant song writer/singer behind the Jam, enjoyed a huge resurgence in his career at this point as well. Mod was a buzzword again. Oasis' singer Liam Gallagher opened a clothing boutique/brand range called "Pretty Green" (after the Jam song of the same name) which sells very high end parkas, polos and other mod fetish items. 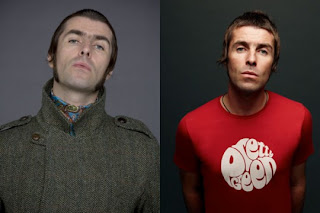 Liam Gallagher, Pretty Green Clothing.-->
Mod continues to this day. In 2012, a British cyclist named Bradley Wiggins won the Tour De France. Bradley was a self avowed Mod, and the British press were once more excited about that little three letter word. So excited were the Brits that their decades old fashion invention was being talked about again, that they staged a "mod rally" at the 2012 Olympic games in London, complete with a parade of "mods" on scooters and pre-recorded music by the Who and the Jam as well as a live performance by Blur. 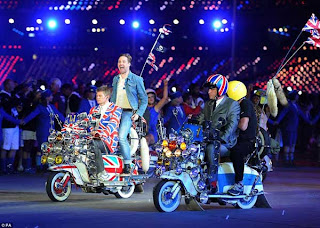 Mod will probably never die. Like the word "pop" itself, it no longer means what it used to. The concepts and images of Mod have become so entwined in popular culture that I'm sure they will never be fully extricated or reclaimed for the dedicated, small cult following that made these things what they are.

Posted by Charles Matthews at 12:39 PM