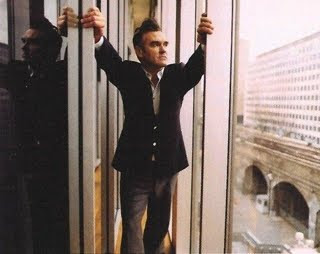 Morrissey! And his Sword! What needs to be said, really? This here is a B Sides record by a man who has never released a bad song. Like the Wildhearts, or to a lesser extent the Manic Street Preachers, Moz throws away songs that most bands would base entire careers around.

I have consumed a bit of red wine this evening while writing lyrics and attempting to play guitar. My wife is at work, and when she comes home, she will either A) drink more wine or B) berate me because I drank all the initial wine. I'll buy more wine before she comes home, and attempt to pass it off as the original wine (left over from last night), while also attempting to appear sober. Which will not fool her for a second. All of this (and nothing) will affect my review of the new Morrissey B Sides record, which I have been listening to non stop for a week now.

MORRISSEY! I love this sad old bastard forever. The Smiths, yes. His solo career, BIG yes. His last B sides collection, "My Early Burglary Years", released in the early 2000s (I Think), was flawless. This one, entitled "Swords", for some reason, is just as awesome.

18 tracks, some of which have been released before on albums, most of which were relegated to Euro-B sides and some such similar ghettos. Every song a goddamn winner.

Opening with the stormingly atmospheric non-clunker "Good Looking Man About Town", and never letting up from there, this disc is as solid and flowing as any recent Moz long player.

"Don't Make fun Of Daddy's Voice is a hard rocking guitar based tour de force. Other highlights being "Christian Dior", "Shame Is The Name" (featuring one of Moz's catchiest hooks in ages), "Teenage Dad On His Estate", and on and on.

Only Moz's (sort of half assed) cover of Bowies' classic Glitter era anthem "Drive In Saturday" could be construed as a near miss. One mediocre track out of 18 is hardly bad. Even on this tune, the band shines. The guitars are shimmering and ballsy and the rhythm section pumps out the Glitter style bump and grind like they're gonna party til it's 1974. Moz attemp;ts to breathe his own style into Bowies' trad melody. this is where the song fails. You can't really improve on the original. Sorry, Steven. Moz has had impeccable taste in covers previously. T. Rex's "Cosmic Dancer", The Jam's "That's Entertainment" and the NY Dolls "Trash" have all benefitted from the Moz treatment. Not so much this old Bowie chestnut. Go figure.

In closing, Moz the man and the artist certainly hasn't run out of vital sounds and lyrics to titilate and inspire. He really has not let up for a moment since the Smiths, and perhaps this is why he looks so constipated and grey on the discs' cover and rear tray photos. The lyrics enclosed in the Cd booklet are all great, but the interview section seems a bit useless. We've all read this stuff before, if we are the sort to be interested. And I am.

Recently, Moz has had some onstage troubles. Passing out and cancelling a show mid set seemed par for the course. Being hit in the head by a fan thrown bottle and storming offstage in a rage, just a few dates on the tour later, uh...seems also par for the course. I was present when he cancelled a Boston show less than halfway through his set, due to throat problems. I was also present at the rescheduled make up date, where he delivered one of the best shows I have ever seen in my life. So I certainly cannot complain, and neither should you. If you're a Moz fan, you know that the man is a bit fragile, but will deliver when the chips are really down.

Nevermind. This is a GREAT CD, and it stands alongside "Early Burglary Years" as some of my fave Moz stuff. This man's B Sides are better than most people's A Sides, and that's a fact.

Peace out, I'm drunk. P.S.- Moz, if you're redaing this, I miss Alain Whyte. Bring him back!
Posted by Charles Matthews at 6:16 PM