That Greasy Kid Stuff-- All about Pomades! 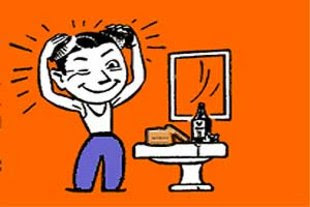 Back in the day, when men took pride in looking smart and sharp for their work day, it was unheard of to be seen in public without a fair amount of grease in one's hair. A man's hair was meant to be neatly combed, slicked back and shiny. This is one of the many great male traditions that have fallen by the wayside since the late 1960s. The "hippy" look (long unkempt hair, baggy dirty clothes, pit stains on virtually everything) might have been a reaction against the overly stuffy, dressed up look of the previous thirty years, and perhaps it was a relief to some people.

But most people, once they "let their hair down" never put it back up again. As a result, the sharp neatness of a man's appearance has gone the way of the Victrola and the Edsel. Sweat pants, baseball caps, terrible white plastic running shoes, shapeless haircut,baggy jeans, sports T shirts. This is what a "man" looks like today. If, heaven forbid you are into the very retro idea of looking sharp, then you sir must be a homosexual. Sure, I love the idea that gay men have kept the retro look alive for years, but that's not my subject here. I'd like your basic straight man on the street to start giving a crap about his appearance again, and I'll bet alot of you ladies and fellas would enjoy that as well.

Lately, largely because of the success of retro themed TV shows like the brilliant "Mad Men", the hipster on the street is now (at least in small numbers) starting to sport nicely cut hair and the slick, pomaded look is coming back amongst the clued in. Not so much among the Bud Lite and Nascar crowd, but you can't have everything. NOT that I have anything against Bud Lite or Nascar, as I know some fine people who are into those things, but it just isn't for me.

Of course, the Rockabilly and Swing communities have been all about this all along.

I've been greasing up my head grass since around 1994, when I first starting getting deeply into rockabilly. My tastes have grown and matured, and I have had different looks over the years, but I have always returned to the pompadour. I cut and styled my own hair for years, but since moving back to Michigan I found a great Detroit area barber shop (The Chop Shop in Berkley), who specialize in period haircuts. 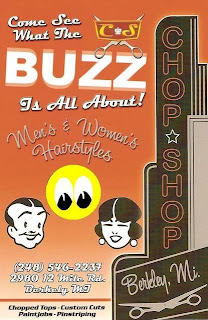 People ask me about it sometimes. "How do you get your hair like that?" and "What's that goop on your head?" If they seen genuinely interested I'll give them advice on what to use. As you might guess I've used alot of different varieties of "greasy kids' stuff" over the years. Here are a few of my faves. 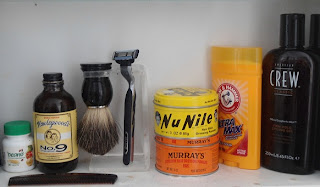 Murray's Superior Pomade(Known as "The Orange Can")--
Here is where the rockabilly journey begins, for nearly everyone. It's either this, or Dax (known as "The Red Can"). Dax is getting harder and harder to find these days, so most greasers go right to the sticky stuff, The Orange Can. Sticky it is. a handful of this stuff will last you a week or so of regular every day wear. That's right. Put it in your hair on Monday, and don't wash your hair til next Sunday. Even if you'd like to wash your hair, this stuff ain't coming out. Rain, sleet, snow, a hurricane: your hair ain't going anywhere, cat. Yes, it is greasy and sticky and it will end up on everything you own. Your clothes, pillowcases, doorknobs, faucets, your cat, your wife or girlfriend or boyfriends' face, the Murray's will find it's way there. Having said that, it smells great, really masculine and clean, with a slight honey-like undertone. And it holds. Man, does it ever hold. 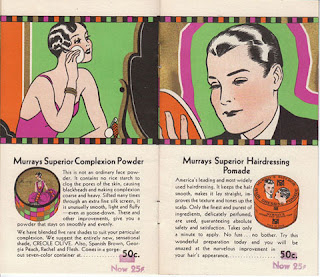 Murray's Nu-Nile-- Another great Murray's product. Murray's is a hair care company out of Detroit, Michigan that started in the mid to late 1940s. they initially catered to African American men for the most part, but the 1950s greaser trend found them a new and very loyal clientele, which stands to this day. All Murray's products can still be found in the African American health and beauty section of any drugstore anywhere. Nu-Nile is a great pomade. Ever so slightly lighter than the Orange Can, and smelling much the same, Nu Nile gives you a wetter, less waxy look while still providing the really super strong hold. It's also a bitch to wash out, but it does wash out with a couple of tries, unlike the Orange Can stuff, which just gets harder and harder the more water you put on it. It isn't *quite* as greasy and sticky as the orange can, but it's close. This is what my barber recommended to me and I use it regularly.

As a rule, I do not ever endorse hair gels. These products are for the Ryan Seacrests of the world, with their fake spiky haircuts and their stupid trendy clothes. However, there is one, and one only, exception to this rule. American Crew Classic Firm Hold.

I hate to even describe it as a "gel", because of the unpleasant images that word puts in my brain-pan. Club hopping Jersey Shore types using handfuls of fruity smelling, bubbly pink goop to spike up their badly cut fades. As you can see though, Am-Crew is not pink, it's packaged in a classy and masculine brown bottle, and it smells fresh and clean, like a barber shop. This product is actually used on the TV show "Mad Men", for outdoor scenes where hair has to stay in place. I personally use it when I'm sick of having so much grease in my hair. Every few weeks it's good to wash all the pomade out, use a different product and give your scalp-astrotrurf a break. One of the drawbacks of pomade is that it will in some cases give you acne on your scalp and hairline. It does occasionally do this to me. So when I get a flare up, and I'm tired of all the grease, I'll go back to American Crew for a couple of days. Now, this product does dry hard like a gel. You can re-animate the slick look with just a little water, but if you do that too many times over the course of a day you will wash the product out and end up with a huge puff of hair on top of your head instead of the slick bad ass-ness you started off with. So use with caution. 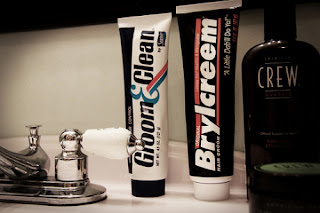 Groom And Clean and Brylcreem---

Neither of these can really be called pomades, nor are they really gels. They are both traditional hair products that have been used for years and years. Neither is found in the hair styling section at your local drugstore. They are actually found, in most stores, in the shaving and/or men's toiletries section, near the "Just For Men" hair dyes and the shaving creams and razors.

Brylcreem is a super traditional, ages old product. It's packaging will claim that it's "never greasy", but that is not at all true. Basically it's a light hold pomade/grease in a tube. It smells good and is uber-traditional, but does not have the hold of a pomade or gel.

Groom And Clean is a different matter. It also comes in a tube, and usually sits right next to the Brylcreem at your local Walgreen's, CVS or Rite Aid. However the stuff that comes out when you squeeze the tube looks like toothpaste, and smells like a delicious cinnamon pumpkin bread. It's a clean, sweet smell that people either love or hate. I love it. I suppose what it actually is is an early version of a gel. When the Groom and Clean box tells you that the product is "greaseless", it's not lying. It holds well and washes right out, while giving you a bit of the "slick" look you're going for. Again, I use this when I'm tired of the grease, and when I want more hold and shine than the Am-Crew gives me. I've been using it alot lately.

Here's a great 1950s Brylcreem commercial. I'm not sure I agree with it's claims, but it has the exact mood you want when you're doing your hair. Ain't that jingle catchy? Almost makes me want to give Brylcreem another chance!
http://www.blogger.com/img/blank.gif


In short, if you are interested in looking sharp and clean like real men did in the 1930s-1960s, the above guide is a good start for you. And if I haven't presented you with enough choices, here are a couple of links to help you out.

Slickville: This is a site all about pomades, retro hairstyles, and anything goopy you can use in your hair. I love it!
http://www.slickville.com

The Rebel Rouser: Here is a great blog with Pomade Reviews and commentary. This guy collects pomades and knows pretty much everything there is to know.
http://therebelrouser.wordpress.com

I guess in closing, the thing I want y'all to remember most of all is to have fun with it, and find your own personal style. It ain't easy bein' greasy. 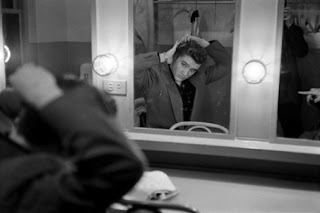 Posted by Charles Matthews at 12:10 PM