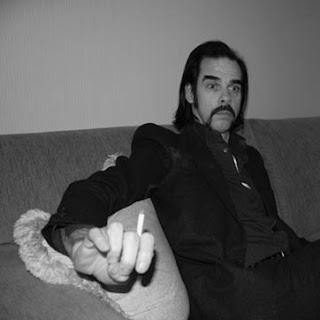 There's a scene late in Nick Cave's latest book that interests me a bit. The book is "Death Of Bunny Monroe", and the story follows the exploits of traveling salesman Bunny, who is clearly a sex addict of the highest or lowest order, depending on your particular slant on the subject. Bunny is married with a small boy-child, and his wife kills herself after suffering years of Bunny's infidelity. Bunny takes this as his cue to fuck more sleazy women and drink massive amounts of alcohol while dragging his child along on a drunken, womanizing, traveling sales hellride. The other things I can understand, but the traveling sales? I shiver in revulsion. The book, as you can imagine, is pretty good. The writing style has simplified quite a bit since Nick's earlier book, "And The Ass Saw The Angel" but is no less realized. You feel bad for Buddy, a completely disgusting, pathetic and selfish character, who cannot stifle his lower impulses, even when the guilt and shame is killing him. He is dragged by his penis from sleazy whore to lonely housewife to furtive masturbation and back again, and his feverish inner monologue while this happens is pretty compelling. Not to mention gross.

There is, however, this scene at the end, where Buddy rapes a junky girl while she is nodding out, perhaps overdosed, because she looks exactly like one of his sexual obsessions, one Miss Avril Lavigne. Well, there's no accounting for taste. This scene is sordid and terrible. But it's so very Nick Cave it sort of sums up everything you need to know about the book and maybe the author.

Nick Cave has been exploring themes of degradation, drugs, lust, murder, Biblical doom and squalid darkness since he fronted Boys Next Door in the late 70s and the Birthday Party in the 80s. His solo career has followed the same shame-ridden path, albeit with frequent glimpses of gorgeous redemption in the form of songs like "Straight To You" from the "Henry's Dream" album and similar gospel tinged ballads that followed. That's just my perception, but I feel like Nick has allowed more positivity to creep into his music as he's aged. He's in his mid 50s now, and seems to want, for the most part, to age gracefully in the style of someone like Leonard Cohen or Lou Reed.

His latest project, a band called Grinderman, is an even more interesting chunk of meat. Their first album explored many of Nick's usual themes, and one song from it, like that scene at the end of "Death Of Bunny", sticks out for me. It's called "No Pussy Blues" and it seems to be the tale of an aging stud who, um, can't get any. The music is a grinding, thrusting blues-fuzz wall of noise. The repeated line "she just didn't want to" is both hilarious and telling. And I must quote:

Perhaps Nick's most frightening lyric ever. The song begins with the lines "My face is finished, my body's gone..." what a drag it is getting old. Now, I'm sure Nick Cave, a married man mind you, and a rock star, could certainly find some willing nubile that "wanted to". The fact that he's willing to write songs like this for the rest of us though, well, that's very nice of him. I haven't really ever had any problem getting female attention, my ego insists I tell you. However as someone who is pushing forty (pushing VERY hard)I can relate to the disintegration of one's face and body. And my back always hurts. Always. And the bunions! Nevermind me though.

Nick had this to say about the song: "As our dreams and desires are hung on the butcher's hook of rampant consumerism, and the mirage and the illusion and the Nike trainers are served up on the trembling quim of an impossibly nubile girl-thing, No Pussy Blues tells it like it is. It is the child standing goggle-eyed at the cake shop window, as the shop-owner, in his plastic sleeves, barricades the door and turns the sign to "CLOSED". It is the howl in the dark of the Everyman."

Anyone who can use "quim" correctly in a sentence is cool beans with this rodeo clown. And that quote could also be used to describe "The Death Of Bunny Monroe" in it's entirety. So it ties together, does it not.? Consumerism, aging, sex, impulse,trembling quims. Now we get it.

Grinderman have a new album out, simply called Grinderman 2,and it is awesome. It's equal parts the Stooges, Howlin' Wolf and the Birthday Party, with some great raucous ugly guitar noise and the expected emotive gospel tinged ballad thrown in for good measure (pretty much every NC album since "The Good Son" has had one of these, and they usually end up being my favorite songs on the album because he doesn't seem to be playing a character in the lyrics. It seems to be the real Nick Cave singing, with the exception of the awesome "Nobody's Baby Now", which is another murder ballad). The lyrical voice is still there, and I for one am glad to hear the revival of Nick's hilarious yelps and howls, guttural sounds interjected into the noise that he hasn't really done much since the Birthday Party. I guess a good blues riff played on a fuzzed out bass guitar can bring out the inner Iggy in anyone.

"Mickey Mouse and the Goodbye Man" kicks of the record in a very Iggy/Morrison state of mind, with the aforementioned distorted bass snaking through a burnt out hallucination that may or may not be somewhat Biblical in undercurrent.

There's a vagueness to some of the lyrics, maybe an impressionism, that lets the listener throw their own subconscious garbage onto the meaning of the song. Like this snip from "When My Baby Comes":

This might have a specific meaning to it's author but unless you're a 54 year old Australian alternative rock star (no, not Rick Springfield) you might have to think about that one for a minute. To me it's about aging, again, and the comfort of loved ones, or the lack of comfort of loved ones and the other things we devote our short lives to. To you, I dunno.

More straight forward, maybe, is "Worm Tamer", one of my faves:

The longing, self deprecation and desperation here, as well as the putting on a pedestal of ones' loved one are intensely obvious. Whether he's talking about a lover or a god or an addiction, it's not so easy to tell. I hope it's all of those things. There's voodoo imagery and a semi-Bo Diddley beat and some irritating electronic noises and I like it quite a bit. Nick mumbles the lyrics like he's got a mouthful of brie cheese.

The record in it's entirety is full of blues references, musically and lyrically, and the electronic bleeps and static wails serve to modernize that timeless feel. It's blues as seen through Iggy and Morrison and Velvet Underground-colored glasses.

Well you have to be glad that people like Nick Cave still exist. That there is more out there than your Lady Ga-Ga and your Brendan Flowers or whatever's out there these days, I confess I don't really know. I've listened to nothing but the Jesus And Mary Chain for years, while poking myself in the balls with dirty forks. What I'm saying is, Nick Cave is cool. And he's old. And so am I. And probably, so are you. So put that in your iPod and listen to it all day.
Posted by Charles Matthews at 10:30 AM