More Fun Than A Flaming Yule Log; My End Of Year Blog 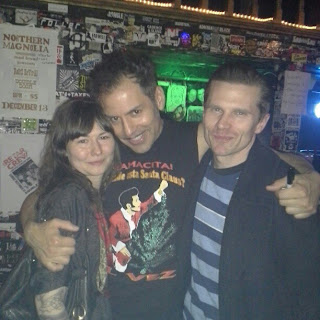 So I was going to write my usual "Ten best records of the year" shit sandwich, but I care not for such ass-clownery at this point. I couldn't find ten new records I liked, really, so I decided to just prattle on about stuff that I did like this year.

Now, forgive me, because it's been a rough year and I could possibly be a bit grumpy. My Mom died this year, I embarked on yet another life changing move to yet another new city (Chicago, land of subway crappers and drive by shootings, not sure if I like that yet), I got a new job that I absolutely hate, have had no time to write or record any new music at all...eh, whatever. You've probably had it rough, too. Nobody's had it rougher than Justin Bieber, who has grown people plotting to kidnap and rape and kill him, all on account of the fact that his music is the equivalent of warm, stuck together gummy bears.

"So what DID you like this year, Chuck Matthews?" I hear you saying out there in the night like a bunch of rude grasshoppers rubbing their hairless leg-stalks together.

As the great Gene Vincent once sang, "Weeellllllllllll....."

NATIONAL TREASURE #1: The GREAT EL VEZ. You may have noticed the photo at the head of this blog post of one very pretty girl, one El Rey De Rock And Roll, and one very drunk guy in a stripey shirt. That's my wife Faith, El Vez "The Mexican Elvis", and me, your humble procrastinating genius. This was taken the other night in Chicago after yet another life affirming X-Mas extravaganza performance by El Vez, his band the Memphis Mariachis and his lovely backup singers, The El Vettes. This man has improved my outlook on life every single time I've seen him play (this was maybe the fifth or sixth time, can't remember). How does he do it? He uses a complex gumbo of political satire, Mexican pride, a mental library of every great song, move, joke, look and sound in rock'n'roll, and of course, the legendary coat tails of Elvis Presley. It's not Xmas until this guy pulls his bag of spangled jumpsuits into town. His show has not changed much in several years (he could probably benefit from including some more recent references musically), but it is the most fun holiday rock and roll show ever. One that doesn't skimp on the jokes, the theatre, or the actual rock and roll. 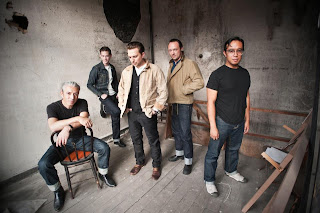 NATIONAL TREASURE #2: THE GREAT JD McPHERSON. I've been championing this cat since I first heard his record a few years back. Those of you who actually read and pay attention to my rantings here (and Google stats tells me that there's several thousand of you drooling internet weirdos) know that his disc "Signs And Signifiers" was my fave record of the year 2011. His combo of Little Richard/Larry Williams style vocals, jumpin' blues and rockabilly and "aw, shucks ma'am" nice guy-ness has been blowing people away all over the country while he and his band tour their many asses off playing every dive in the nation six times a year. This has all worked out very well for him, as he is now getting rave reviews from national big wigs like Rolling Stone Magazine, and appearing on every talk show in TV land (Leno, Conan, Letterman). JD and his amazing Chicago based band (who don't have a name, and probably should...) are an inspiration. His record, "Signs And Signifiers" is a couple years old now, but it never gets old for me. 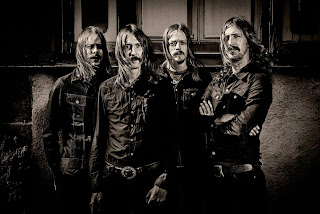 GRAVEYARD: "Lights Out"
Everybody knows I'm a big fan of everything from the golden age (you'd call it "retro"), but most of you may not know that for me that includes not only the 50s and 60s, but the 70s as well. Graveyard are a Swedish rock and roll band that combines the best of obscure 1970s occult rock with howlin' blues riffs, a very bleak lyrical outlook and a singer that can shriek and howl like a wide eyed, straining, male Janis Joplin. alot of people say he sounds like Soundgarden's Chris Cornell but I don't give a crap about that. "Lights Out" is their new record and it's amazing. It rocks, it rolls, it's a bit of a downer, but in a great way. It's kind of like listening to Black Sabbath in Jimmy Page's recently renovated 1,000 year old castle in the bleakest of Swedish winter time forests while high on the pot drugs. You like that, don't you? 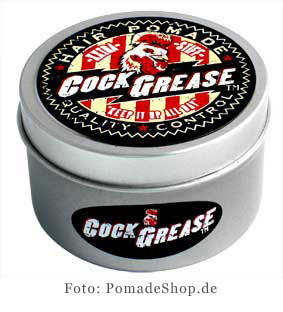 I first saw advertising for this stuff on the walls of a bathroom in Austin, Texas at the Continental Club while I was taking a hurried pee-break in the middle of an awesome honky tonk set from Junior Brown. There were stickers that said "Cock Grease" on the walls and mirrors, and being the modest sort of old fashioned fella that I am, my cheeks sort of reddened in slight embarrassment. Then I laughed, then I peed. Then I went on with my life. Later I realized that Cock Grease was indeed a brand of pomade, and having spotted some in Chicago's "BROKEN CHERRY" shop, I bought a tin of it. My verdict? It's the stiffest pomade I've ever tried, in fact a little too stiff if you use the amount you'd normally use of another brand. If firm hold is your thing, look no further. And also, it smells AMAZING. Like honey and sugar cookies and candle wax. Mmmmm. Screw putting it in my hair, I'm going to put it on toast and eat it.

DOCUMENTARY OF THE YEAR: 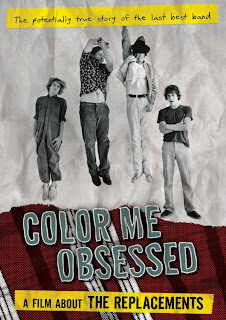 "Color Me Obsessed: A Film About The Replacements"
This is a long awaited fan made doc about one of the greatest rock and roll bands of all time. Minneapolis power pop/rock/punk/alternative band the Replacements have influenced pretty much everyone who picked up a guitar since their reign as indie rock kings in the late 80s and very early 90s. This documentary features 1)No Replacements music 2) No Replacements live footage and 3)No interviews with actual band members. Despite that, it does have a lot of famous faces and many hilarious and awe inspiring stories. After watching it, you'll want to listen to their music, though, or better yet, just play one of their records while the DVD is playing. Essential. 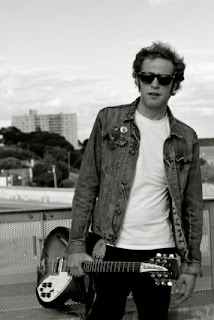 DIG THE BRAND NEW BREED: Kurt Baker's new record "Brand New Beat" on Jolly Ronnie Records is a modern day revisionist history of power pop that favors the populist (Rick Springfield, Butch Walker, The Knack) as well as the cult (Big Star, Paul Collins, The Jags) sides of the genre. A new classic and you heard that here first.

That's my year end wrap up. I can't think of anything else right now that I actually liked this year. There are a few things I could mention like LAURIES PLANET OF SOUND RECORD STORE in Lincoln Square, Chicago. They're my new fave record store in my new fave neighborhood in Chi-town.

Let's kiss this year goodbye as it shimmies it's rotten stinking way out the door, and hope the next year is better, shall we? Toodles, kids.
Posted by Charles Matthews at 2:26 PM